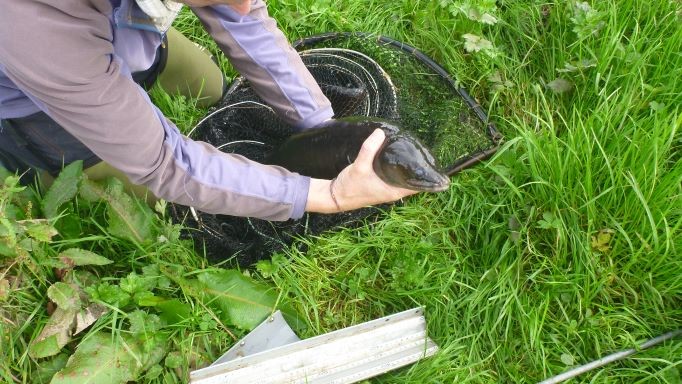 Eels recently caught during a survey at the Kakahu River, image courtesy of Greg Ryder.

“The water quality and in-water environment problems in the Kakahu River are long standing and typical of a small river flowing through hilly farming country,” Opuha Water Ltd says in a statement today. “This is borne out by the fact that other similar rivers in the area, which do not receive Opuha water, have the same or similar water quality grades and issues.”

“We do not claim that the Kakahu River is pristine,” Chief Executive Officer Mockford said, “it clearly is not. But the research and sampling data clearly shows the state of the Kakahu River was degraded long before the Opuha Scheme began to discharge into it, and that, in fact, the addition of Opuha water into the river has some positive benefits.”

Mockford was speaking in response to presentations to Environment Canterbury (ECan) last week that claimed major degradation in the Kakahu River was because of water sourced from Lake Opuha discharged into the river via the Kakahu irrigation scheme. He said substantial scientific data paints a very different picture of the causes of the river’s low-quality rating.

“Opuha Water Ltd is a local cooperative owned by our shareholder farmers; farmers who live and work alongside the Kakahu River, who have a personal interest in that river’s health. It is a place they recreate in and enjoy its natural environment. There is no way our shareholders would allow us to have a substantial negative impact on the river through our operations, and it is clear from our data that that is not the case.

“What our research shows is quite clear; there is no marked difference in the health of the river upstream of our discharge and downstream of it. Levels of aquatic insect life and fish species such as bullies, trout and eels are much the same up and downstream of our discharge into the Kakahu. And, looking at the full Land Air Water Aotearoa data, there is no marked decline in ecological measures in the river after the Opuha discharge commenced.”

The research also shows that faecal coliform levels in the Kakahu River are higher above the Opuha discharge than below it. This suggests, Mockford said, that the Opuha irrigation discharge is having a beneficial dilution impact on the Kakahu River in terms of the levels of potentially harmful organisms.

Mockford said that OWL “well and truly” meets its consent requirements concerning the quality of water it discharges into the Kakahu River.

“However, we are not content to sit back and say ‘well we meet the consent requirements’ and do nothing else. We are actively working to improve the water quality in all the Opuha irrigation schemes’ catchments, including the Kakahu. Our monitoring and research is extensive and is used to identify ways we can help improve the river’s water quality, and help our shareholder farmers better manage their farming systems and therefore their potential impact upon the river.”

“OWL will continue to work with ECan to further understand this catchment so that enduring positive solutions to the current low grade of the Kakahu River can be considered and implemented.”