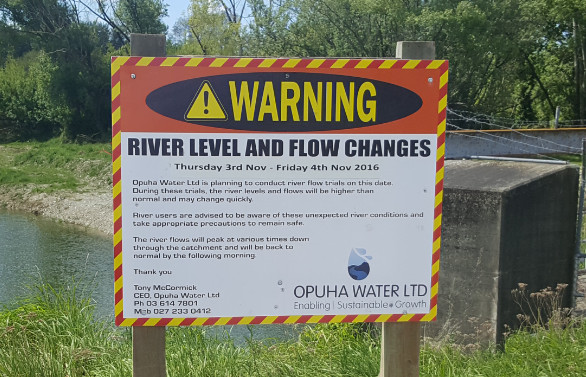 A Flushing Flow has been scheduled for Thursday 3rd November 2016.


Opuha Water Ltd (OWL) is planning to release flows of up to 60 cumecs from the Opuha Dam starting at 10.00am on Thursday 3rd November 2016.

The release will result in a rapid increase in the flow in the Opuha River and the Opihi River below Raincliff and the flow is likely to remain elevated above the present flows for approximately 20 hours.

During the period of the flow release, the flow and level in the river may change rapidly – especially in the Opuha River and the Opihi River immediately below Raincliff.  While the actual flow rates will not be more than might be expected following typical moderate seasonal rain periods, river users are advised to take care in and around the river from Thursday morning to early Friday because the rate of change will be higher than typically experienced.

For any issues or questions please do not hesitate to contact the Operations & Asset Manager – Craig Moore, Mobile 027 460 9721